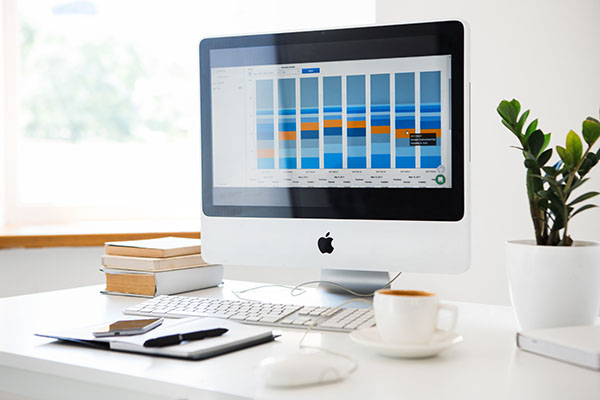 The Return On Marketing Investment is one of the most reliable indicators of the success or failure of a marketing campaign, whether it is on the digital or traditional mediums. Learn how to calculate it.

When reporting the actions on a digital marketing campaign, the Return On Marketing Investment (ROMI) is perhaps the most important value. It is a financial concept that is very useful in Digital Marketing. Basically, ROMI tells us if we are getting benefits with the investment we make, for example, in Facebook ads. Or, on the contrary, if we are spending a lot of money but we are not getting profitability from those ads.

It is worth bearing in mind that an ad on a social network can be effective and have a lot of interaction, but not generate more sales. In that case, our ROMI will be negative.

In order to calculate ROMI, we can use the following formula:

This will allow us to calculate a percentage of income per dollar spent. For example, a 10% ROMI means that you can obtain 10 dollars per dollar spent on a given campaign.

Now, what is a good ROMI percentage? There isn’t an easy answer. It will depend on many factors, from competition in social media for the same audiences, the cost of man-hours and unforeseen events that can for example, take away attention from target audiences, such as breaking news during the duration of the campaign. Some academics situate a good enough ROMI on 2 to 3%, while others claim that you can aim for as much as 5 to 10% or even more. For digital marketing in classic platforms such as Google Ads, Instagram, or Facebook, less than 5% is probably the most common if the parameters are well established.

However, there are other factors that can be taken into consideration. On the one hand, the most popular campaigns end up having much higher ROMIs. It’s a question that seems almost logical. When a campaign becomes very popular, the ROMI should skyrocket. The average ROMI in this case is around $4 per dollar invested.

On the other hand, there is also a relationship between the cost of a campaign and its ROMI. Campaigns that are very cheap tend to generate a stronger ROMI ratio, since in the end they do not need to generate as much revenue to be profitable. But of course, with more investment, more people will be aware of your brand.

And finally, please be careful of not taking ROMI as the ultimate metric for your campaigns since it’s quite difficult to calculate and reproduce with accuracy. Use it along other metrics, such as monthly visitors, Cost per Lead, Cost per Acquisition, Average Order Value, Lead to Close Ratio, etc.

Each project is different. Some websites need constant maintenance and optimization, while others require minimal attention. This means that the price of SEO services is calculated based on the time and research required to obtain quality finishes. The SEO budget depends on the size of the website, the degree of optimization and the scale of optimization that a website, blog or e-commerce requires.

The level of optimization of a website considers the amount of research, technical analysis, keywords, link building and maintenance on and off the site.

For their part, web stores need more optimization than personal blogs to maximize traffic and conversion rate, so they need more comprehensive packages.

Finally, the optimization scale implies the geographic reach of the website, as it implies different tactics depending on the strategy.

Consider applying SEO to your website and making it the heart of your digital marketing strategy. Contact us to discuss how to multiply the income of your company.

External SEO is concerned with improving the ranking of a site on search engine results pages through promotional techniques such as:

On-site SEO involves optimizing the content of the website, blog and e-commerce at a structural level to make it more trackable and friendly for users and search engines. Includes optimization of title tags, internal links and URLs.

Some On-site SEO actions are:

Keyword research is about locating the most searched words and phrases by users. This means that it is essential to tag the content of your site so that search engines can easily locate them.

The keywords used should target frequently used search words and phrases that are relevant to your content and add value to searches. The more keywords that are used and the more relevant they are to users, the easier it will be to find your website, blog or e-commerce. Also, if your website has a higher reputation, it will also be more relevant and better positioned.

Also, it should be taken into account that the position of the keyword in the URL affects its ranking and that the length of the keyword also influences the web positioning. Shorter URLs are easier to find and obviously rank higher.

Technical Analysis SEO technical analysis involves an in-depth review of the technical elements to improve so that Google and other search engines can index and crawl your website, blog or e-commerce.

The most common trouble spots are:

Preliminary SEO research focuses on finding out what’s on your website. This checklist is the content you have and discover the best way to select relevant bookmarks to optimize your website, blog or e-commerce. It includes the topics of your content, the types of media present, and benchmarking, that is, researching sites with similar content.

The goal of SEO is to differentiate yourself from your immediate competition, making your content on your website unique. This means that if your website has valuable content and responds to organic user searches, it will be easier for web crawlers to find.

The research done dives into the website’s specific market and the audience it is trying to reach. This step takes many factors into account and is one of the most expensive considerations in your budget.

You deserve to have your own custom designs. We’ll create a design that’s uniquely yours, with a brand message that reflects your personality and goals.

We create the brochure of your company, brand, product or service from scratch specially designed to show your value proposition to the target audience.

Make your business card design stand out. We take the time to understand what you need so you can have an impactful card that will make your company stand out.

We make sure that our clients have a professional and unique corporate brand that allows them to promote their companies and increase their chances of success.

We take great care in every detail to make your brand unique! Our logos are handmade and then digitally designed, always thinking about the concept of the brand and target audience.